Common Misconceptions About Resetting the EV3

I frequently see incorrect information floating around about “resetting” LEGO MINDSTORMS EV3. I would like to clear up a few things…

This is more complicated than it needs to be. For starters, this procedure essentially does not actually reset anything that does not also get reset when you turn off the EV3 normally or remove the battery. So, step 1 is really not necessary. If your EV3 is already off, turning it on to reset it is pointless. When you turn it on, it is already as “reset” as it gets. Second, pressing the Left button is not necessary. As we found out in ev3dev issue #957, thanks to the internal pull-up resistors in the CPU, the EV3 thinks the Left button is always pressed during boot. It will make no difference at all if you press it or not. And finally, it doesn’t matter which order you release the buttons. Most of the power is not actually turned off during a reset, so the center button is not needed to turn the EV3 back on. As soon as you release either button, the EV3 will start booting. You might as well release them at the same time.

So, here is my version of the instructions:

0. You only need to reset your EV3 if it is locked up and not responsive, otherwise power it off normally.

1. Hold down the Back and Center buttons on the EV3 Brick.
2. When the screen goes blank, release both buttons.

There is Not a Reset Button in the Battery Compartment

I have seen a number of forum posts that suggest to press the black button in the battery compartment to “reset” the EV3. This does not reset anything. It is used to detect the rechargeable battery pack. The battery pack has a small protrusion that presses this button.

You can also see this switch quite clearly labeled in the schematic. 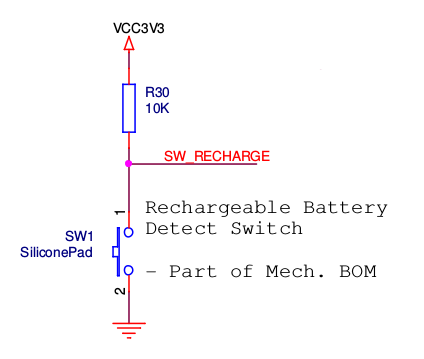